When I first realized that this was tagged as a black & white silent movie about war, I panicked. My attention span isn’t big enough for black & white silent movies, let alone ones about war. Also, as if that wasn’t bad enough already, I checked its IMDb page before watching it and noticed that it was 2:30 hours long. TWO AND A HALF HOURS.Why they needed to make it 2:30 hours long is still a bit beyond me, but more about that later.

To my surprise, watching Wings and subsequently reading about it ended up being a super enjoyable experience (although I feel the need to mention that I watched it in 3 sittings). Let me start by giving you a brief summary of the film.

Although the film was made in 1927, it is set 10 years earlier, in a small American town. Jack Powell (Charles Rogers) and David Armstrong (Richard Arlen) are both in love with this pretty girl named Sylvia. The thing is, Jack’s neighbour Mary Preston (Clara Bow) has this huge crush on him, which he is totally oblivious to. Classic love triangle situation. We feel sorry for Mary, especially since Jack doesn’t really seem that worth her efforts. Eventually, WW1 is announced and both men decide to enlist as pilots. Before leaving, Jack visits Sylvia, who was in the middle of signing a picture of herself for David to bring with him (that’s right, she loves David!) However, when Jack comes in, he assumes the picture is for him and he’s really happy because he thinks Sylvia loves him back. Sylvia is too nice to say anything about it, but later she tells David she loves him. Essentially, both men go off to war thinking Sylvia loves them, but only one of them is right (dun dun dunnnn). Mary also tries to give Jack a picture of herself, but it’s nothing compared to Sylvia’s glamorous headshot (just so we’re clear, we’re still rooting for Mary all the way).

Anyways so the boys go off to war. The rest of the movie involves a lot of air raid scenes… long shots of flying planes in battle… war stuff… Also, Mary actually ends up enlisting as a driver in the army in hopes of seeing Jack again (she doesn’t give up, does she? I don’t see Sylvia doing any of this). On top of the ROmance, there’s also a fair bit of BROmance. I don’t really wanna give too much away, but in essence, this movie encompasses pretty much every genre out there except maybe horror/fantasy/sci-fi. It’s about war, but most of the movie is fairly upbeat and light. There are a few tragic moments, but in the end, it’s still a cheesy romantic “dramedy” that ends on a happy note.

One highlight in the movie is when the soldiers are on leave in Paris. Their time can pretty much be summed up in 3 words: girls, booze and bubbles. Coincidentally, Mary ends up in Paris too and finds Jack, but he’s too drunk to recognize her AND he’s partying with another woman anyways. In an EXTREMELY cliché scene, she runs off to cry in the bathroom and meets this mysterious old lady (fairy godmother?) who tells her that if she wants this guy’s attention, she needs to show some curves. Magically, this woman has an entire rack of beautiful dresses and she gives Mary a makeover. When Mary returns to Jack’s table, she looks absolutely stunning but Jack is too busy hallucinating bubbles everywhere.  I’m trying to think of how to best make you visualize it and this is what I came up with:

Something that puzzled me a bit in this movie is a character named Herman Schwimpf. He appears near the beginning, when various men are lining up to enlist. The man in charge disapproves of his German name and thinks he would be useless because of it. However, he keeps on insisting that he is more patriotic than anyone else, as he displays a tattoo of the American flag on his arm and makes it wave by flexing his muscles. 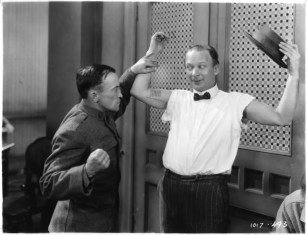 Obviously, this guy was added in for comic relief, which I actually found very effective and genuinely funny. He reappears in another scene later in the movie reemphasizing his ardent patriotism, which suggests that he will have a side story throughout this film. However, after that, he kind of just disappears without a clear send-off. I feel like if you don’t intend on pursuing this character’s presence, one scene would have sufficed.

Another interesting thing is that this movie has nudity, which seems pretty avant-garde for that time. At some point, we see a bunch of men’s bare butts while they are presumably undergoing a physical exam for the army. The most “shocking” part however is when Mary undresses and she’s topless. To be fair, we mostly just see her back, but for a split second the camera pulls what I like to call a “Ben Affleck in Gone Girl” and we catch a glimpse of her breasts. I don’t know if the general audience necessarily noticed this because all it takes is one blink and you miss it.

*UPDATE: I just found out about the “Pre-Code” era in Hollywood. You can click the hyperlink to find out more, but essentially it refers to the period of time in Hollywood between circa 1927 (when the talkies were invented) and 1934 (when the Motion Picture Production Code was enforced). During this time, films didn’t have to adhere to strict regulations, and as a result tended to be more “risqué,” if you will. That probably explains the nudity, occasional sexual content and hallucinogenic drug scene (bubbles! bubbles! bubbles!) in this movie.*

Okay, on a more serious note, let’s get back to length. I concluded that the movie could have easily been shortened by cutting some of the air scenes. There’s a good 30 minutes at some point where it’s literally just planes fighting, which feels more like I’m watching some sort of documentary footage. I know I’m biased because long action scenes don’t interest me, so you don’t have to take my idea to heart. Also, I read that the director was a fighter pilot during WW1, so I respect his decision to make these types of scenes central to his film. I also want to point out that I was actually very impressed by the effects… they are top notch and look even more realistic than some of the effects in movies we make nowadays, which is really something considering the limited technology back then.

Overall, I’m really happy I watched this movie. I gained new respect for silent films and how complex they must be to produce, direct and act in. I admire the film’s vision to try to touch upon so many different emotions and subjects, and while I haven’t seen its fellow nominees for the first Oscars, I’m still very glad it won.

Note: I watched the 2012 restored version of this movie, which required a lot of work, but still managed to preserve its original integrity. I came across this 15-minute documentary about the restoration, so if you ever end up watching this movie, take the time to look at this too, it’s really cool: